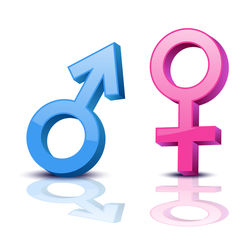 For starters quantitative research refers to data collected that is quantifiable, such as numbers and statistics versus qualitative research which deals with the quality of something that can usually be described using objects, pictures, or words.  Research has shown that boys perform better in math (hence numbers) than their girl counterparts; while girls tend to outperform boys in literacy, hence dealing with words. That probably explains why quantitative research is considered objective, which is a matter of fact point of view, and qualitative is considered subjective, or open for multiple viewpoints and opinions.  Because just like men and women, especially in relationships, men tend to focus on a specific incident or issue at hand.  At the same time, women tend to focus on the long-term or bigger picture in which multiple opinions can become a distraction.

In quantitative research the focal point of the research is narrow and precise – you test for a specific hypothesis and that’s it – much like the tone of most men on Sundays and Mondays during football seasons. In qualitative research the focal point is usually a boarder scope as the investigator seeks more in-depth information or explanation, much like women who are highly skilled at asking questions, probing, or even investigating other people’s situation.

Men, in general, have known to be labeled as aggressive by nature, assertive, and physical.  In quantitative research, the data gathering and numbers can also be seen as aggressive (e.g., attacking, bold, competitive), assertive (e.g., assured, absolute, certain), and physical (e.g., concrete, solid, substantial).  Mainly because numbers do not lie.  Whereas women by nature have been labeled as caring, emotional, and nurturing.  Part of qualitative research is about giving serious attention or concern to a particular matter (caring), exhibiting affection in seeking meaning (emotional), and providing support or encouragement to a certain position (nurturing).

There is no right or wrong, good or bad, or one better than the other.  We wouldn’t want a world of all males or all females.  It wouldn’t make for an interesting habitat.  So just like with the sexes, both types of research have unique qualities and characteristics that are necessary depending on the direction of the study.  And at times, when appropriate, the two working together can make for a great marital union.