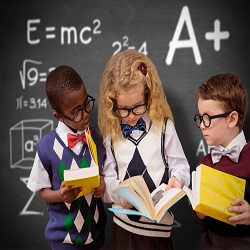 Oh yes, schools out, but those spring standardized tests results are rolling in.  This is the part where many parents, teachers, school and district officials race to see how their students performed.  How did we do? Did we perform high or low or about the same as last year? Here’s another question you may hear some school officials say “what was our ‘national percentile rank’ or NPR?

The NPR on a standardized subject-grade assessment tells you the percentage of same-grade students, who on a national level performed the same or below a particular score.  For example, if Johnny in the 2nd grade has a standard score of 156 and it ranks him at the 65th percentile, then that means 65% of all the other 2nd graders who took the same test (nationally) scored 156 or lower.  On the reverse, 35% of Johnny’s same-grade peers scored above 156.

This information becomes useful because it provides a placement or position on the normal distribution curve of how students performed among their same-grade peers. The graphic below is an example of distribution performance on the Iowa Test of Basic Skills. The distribution for a different assessment may look differently. Using the above example, Johnny performed in the average band of his peers.

In the next image, you can see that each band represents 1 standard deviation from the mean.  Note that the units between points on the percentile distribution are not all equal and the differences between percentage points are smaller between 16% and 84%.  Mathematically, 68% of the population will fall within 1 standard deviation above or below the mean.

Although, we would all love for our students to perform at the very top, it’s not bad either if they fall near or above the average range because they are being compared to their peers.  In other words, if little Johnny ranks in the 65th percentile, no need to be alarmed, he is performing on average or above in comparison to his same-grade peers.  Likewise, if a school or district performed at 65th percentile, it just simply means that the average score of their student group ranked the same or better than 65% of their peers.  Hopes this helps!